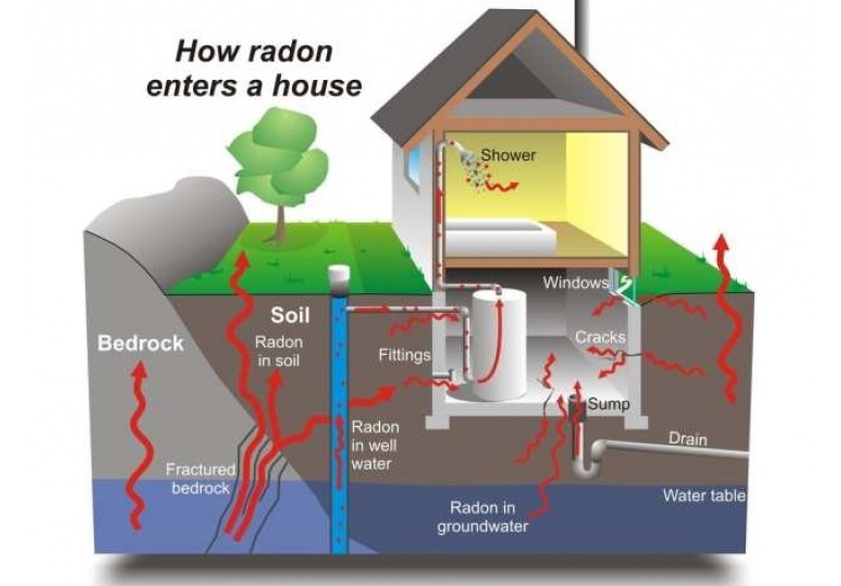 How Radon Enters A Home, the things a Calgary Home Inspector will test in a Radon Home Inspection evaluation.

Testing for Radon in your home.

I was recently asked to do some research on Radon. I thought I would share the results with you.

First of all, Radon is a cancer-causing, radioactive gas.
You cannot see, smell or taste radon. But it still may be a problem in your home.  When you breathe air containing radon, you increase your risk of getting lung cancer.  In fact, the Surgeon General of the United States has warned that radon is the second leading cause of lung cancer in the United States today.  If you smoke and your home has high radon levels, your risk of lung cancer is especially high.

In Canada, Radon is recognized as a significant health risk. Through testing it has been discovered about 20% of homes have levels above the maximum allowed by Health Canada.

The implications for house building, retro-fitting existing housing stock and the impact of Radon testing on the sale process are massive and the issue is basically being ignored. I haven't seen any protests over stopping Radon cancers, or public health notices that homes should be tested for Radon, but the levels of exposure are significant. .

The only way to find out if your home has Radon is to have the house tested. Radon gas concentrates in the basement and first and second floors. The basement is the best place to test, if there is presence indicated, then the first and second should be tested too.

A reading in excess of 4 picoCuries/Litre of air (piC/L) indicates remedial action should be taken.

High Radon gas levels can be mitigated. Some are simple. Fans, for instance, can move air around, diluting the gas with clean air, and increasing pressure to limit in-flow and force internal air out of the property. A vent pipe, like a sewer air stack, can take air from under the slab or foundation can vent the gas to the air outside the home.

There are also methods that can be implemented during construction to keep Radon out of houses. These methods, while relatively simple are not part of usual construction techniques, but if they are of concern to a home owner who is building, have a conversation with your builder.

If he/she is not aware of Radon reduction techniques, there are many resources online that can answer any of your builder's questions. The building code was updated November 1, 2015 to include Radon mitigation.

Testing is simple, but takes time. Ranging from 48 hours to 90 days. Passive devices are placed in the home for exposure to the interior atmosphere, then sent to a lab for assessment once the testing period has passed.

A second method of testing is with an active testing device. Much more expensive than a passive detector, active testing indicates levels in real time. The detector again may be left in place for an extended period to indicate if levels are relatively static or varying over time.

Researchers have lobbied both Canada Revenue to make Radon testing tax deductible and the Canadian Real Estate Association to include Radon testing as part of every real estate transaction. Both bodies have declined.